Apple Smart Watch Series 4,5 and 6 are undoubtedly the best high performing smartwatches in the market. With over 100 million people wearing Apple Watch globally, this feat was achieved immediately after the launch of Series 6.

If you are planning to get this eclectic smartwatch, you must realize that the model comes in two different sizes; 40mm and 44mm. Though the performance of both these watches is almost the same, there are a few clinical comparisons that we have made that shall help you get the right one that fits you like a glove.

As a matter of fact, it is your physical stature and the watch size must strike the right chord for it to look good on you. On the surface level, it is suggested that you wear the 40mm Apple watch if your wrist size is small and vice versa.

Incidentally, there are a few other comparisons we have made that might also help you make the right selection. Let us see the details one by one and there is no particular order that we have set for this.

Obviously, the smaller case variant is less expensive than the bigger one. The GPS only Apple Watch Series 6 40mm costs $399 while the 44mm may cost you $429.

Let us first understand that the size of the Apple watch is measured vertically. On the basis of this vertical case size, you see different variants of Apple Watch.

The display size of 44mm is 1.78 inches while that of 40mm is 1.53 inches. The display size matters a lot in terms of resolution too. So you get a better screen experience in 44mm variant. You can also check the actual dimensions of Apple watch 6 here.

494 X 324 Pixels vs 448 X 368 Pixels does make a difference in clarity. Though it is the minutest of the difference, it matters a lot for people who look for higher resolution capability in the watches.

Though battery life is almost the same 18 hours in both cases, it is technically observed that the 40mm has a lesser battery life in its vigorous running time.

With the technical details being furnished, it is time for us to compare which one suits you the best. 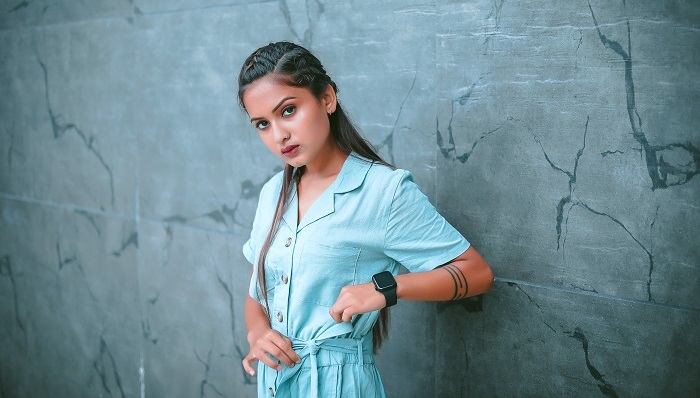 Physical Stature: We have seen this before, but let us analyse this one in a bit more detail. The 40mm version is definitely for slim figures. Yes, especially for women. On the contrary, if you are a male and have a well-built physique, you can blindly go for the 44mm one. Having said that, the Apple Smart Watch Series 6 40mm suits males as well, however, watch out for your wrist size. You do not want to have your watch look puny on your wrist and the flip side not look too large like a wall clock.

Display Size: Though this might be one of the reasons to make the purchase decision, experts reckon that it does not matter much. Nevertheless, let us see what difference the display size has to offer the watches.

The smaller variant has a smaller display size, meaning, the 44mm one has easier access to the watch. You can easily scroll down and operate it without any difficulty. At the same time, the icons in both versions are made apt that you might not face much of a difficulty in 40mm too. Further, the aesthetic appeal of the watch differs in both cases.

The 44mm one is more prominent and looks appealing for its size while 40mm might go unnoticed sometimes. This is mainly because of the display size.

Battery Life: While the newer Series 6 has almost the same battery life, Series 4 and 5 has to offer better battery life for 44mm than the 40mm. if your purchasing decision is based on the battery life, and if you plan to purchase 4 and 5 Series, then you might opt for the larger casing model.

Apple Bands: As you are aware, Apple offers bands only for specific sizes. If you are particular about the bands, then you must know the different brands available for these two versions of the Apple Watch.

How To Make the Purchase Decision?

If you are particular about the looks and battery life, then you can go for the 44mm model which looks more appealing and has a longer running time. Imagine, 44mm with a leather loop as the band looks excellent on you. Especially, if you are well built.

At the same time, if you are looking for a smaller watch and looking to purchase the less expensive model, 40mm is a no brainer. All the more, the performance of both the watches are the same and does not give any difference technically. Also, if you are of a slim figure and have small wrists, 40mm shall suit you the best.

There have been instances where petite stature will look for bulkier watches and vice versa too. Though there are many personal preferences, the technical differences between the two in terms of performance is absolutely nil. Yes, the price difference also matters the most. While one might say that visiting an Apple Store will solve the size issue for you, but the price remains the same for both the models; be it offline or online purchase.

Lastly, operational ease can make a difference in your decision. If your fingers are broad and the smaller screen size might irritate you. In such cases, 44mm shall be the best pick.