So many of us use smartwatch, but do we know that we can also use it as a remote? Smartwatches have a sensor named infrared. It is not a very commonly used or expected feature among the audience but with the increasing popularity and usage of smartwatches; we desire every feature to be presented at our wrists and with the IR blaster (infrared sensor) we can also use our smartwatches as a remote control for TV, AC and several other devices. Won’t it be great to have a smartwatch that can control every device with a single remote? I for one would feel like a Spiderman to control devices from my wrist.

What is an IR blaster?

Infrared Blaster (IR blaster) is a sensor that controls a device that is traditionally controlled by a key button remote. The common use of an IR blaster is to change the channel or record one in a device, say television or radio. With the technology and usage of smart devices, it extends the IR blaster to be used as a smart control to infrared devices, thus putting all the different remote key press controls behind the door.

How IR blaster works in a smartwatch

The IR blaster presented in your smartwatch gives a signal to an external device that allows you to control and change the device, which is normally operated by a remote control key. You can easily pair your tv, DVD, music player, phone, etc via Bluetooth. So you are basically wearing an Alexa or Google speaker on your wrist.

Benefits of a smartwatch with an IR blaster

Now that we know what an IR blaster is you can ask why it is helpful. Well, first and foremost is with the smartwatch that has an IR blaster you don’t have to have thousand different remote key presses for every device. It gives freedom to operate any connected device with a gesture or voice; you can save millions of battery life with an IR blaster. You can easily operate any smart device from anywhere by connecting the smartwatch to your device via Bluetooth.

Now that we have seen the advantages of having an IR blaster in a smartwatch, in the following scrolls, you will find a list of smartwatches that has an in-built IR blaster. 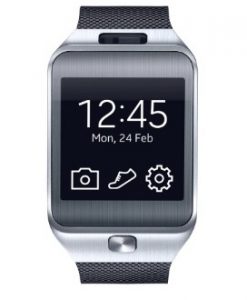 Samsung has been the company constantly producing and adding features or modules that are needed and expected by the audience, it has been one of the reputed company to produce top-notch quality smart devices and smartwatch is no excuse. It has been a while since the Samsung gear 2 came into the market.

The dimensions of the watch are 1.45 x 0.39 x 2.3 inches and the weight of the product is 2.4 ounces, perfect for everyday wear and long work hours. It has 1.63 inches touch screen display, interchangeable bands that you can change to suit the occasion. The watch is IP67 water-resistant makes it perfect for hiking, swimming, etc.

With all the tech features like health tracker, fitness tracker, multiple watch-faces, and smart notifications, Samsung has also added a built-in IR blaster in the gear 2 which you can use to change or control your TV from anywhere just by your wrist. By connecting your TV to a smartwatch via Bluetooth and using watchON you can enable this feature, thus now you don’t have to get up and search every time you want to switch on or off your TV just a voice command would to it. 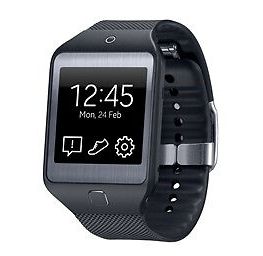 Samsung Gear 2 neo is an ordinary-looking smartwatch-like any other smartwatch, they make it to be cheaper for smartwatch users but the features talks for itself. The watch has a 1.6-inch rectangular touchscreen display. You can easily connect it with Bluetooth and get all smart notifications like calls and alerts right to your wrist.

The smartwatch has an internal storage of 4GB and a battery of 300mAH that can easily last up to 3-4 days with single charging. It has a fitness tracker that keeps track of your everyday calorie burn, steps, and physical activities and a health tracker that stores all your medical data in your smartwatch and phone.

The watchON remote with IR LED sensor gives you the comfort of watching your TV with no handheld devices, but only with your smartwatch. The Samsung S voice helps you to give a voice command to the smartwatch that helps you control your TV.

We are certain now that you could choose the smartwatch with the IR blaster that you have been waiting for a long time. With the ongoing technology and busy days of us, we need everything in a device that we can take everywhere without any hassle. Smartwatch with IR blaster comes as the best option for anyone who is looking for an alternative to key press remote and to eliminate the struggle to change their batteries repeatedly.