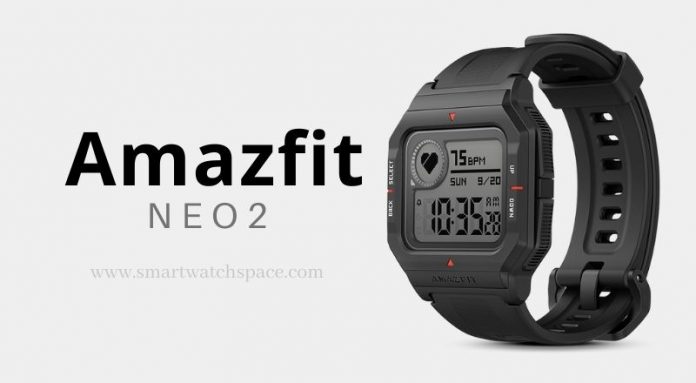 Amazfit is a very popular smartwatch brand of the famous Chinese company Huawei. This company and the brand produces a large number of smartwatches every year. Recently Amazfit launched a new product, that is Amazfit Neo and it gained much more popularity than expected. This year Amazfit is also going to launch a new model in the previous series called Amazfit Neo 2. Today’s topic is all about that. In this article, I am going to share the features and other information about Amazfit Neo 2 that you probably can see in it after launching.

Here I am going to share some information about features that are expected to be present in the upcoming model Amazfit Neo 2. These specifications may change somewhere and the exact specifications will be available after launching the product.

First I am going to talk about the probable design of Amazfit Neo 2. As we can see in the previous model Amazfit Neo, it has a classic, simple and retro kind of look. So we can expect that in Neo 2 as well. The plastic body, lightweight design and polyurethane strap can be seen in Neo 2 like the previous one. The long-lasting strap and flexible body will be there as well. Other than that we can expect more colour options and a large dial in Neo 2.

Amazfit Neo has 1.2 inches of STN monochrome display that is expected to be present in Amazfit Neo 2. There may be a possibility of giving a larger and brighter display to it. Even the brightness and colour adjustment will be better in Neo 2. The last model hadn’t a touchscreen, so we can hope to get a touchscreen in Neo 2 instead of physical buttons.

Amazfit Neo has some exciting smart features and sensors, so we can expect more from Amazfit Neo 2. Sensors like heart rate monitor, sleep tracker, accelerometer, pedometer will be present for sure and other than that we can expect SpO2 support also. It will also have missed calls, message alerts, alarms, stopwatch and popular sports modes like running, cycling and walking.

These are some specifications that may be seen in Amazfit Neo 2.

The price of the previous model Amazfit Neo was near about 40 USD, so we can expect that the upcoming model Amazfit Neo 2 will be priced around 50 to 60 USD maximum. The price can be different, depending upon the company and sites.

Things that you will get:

Amazfit is a popular brand, so like others, they also have some features that are constant for every model. Let me take you through it.

Things that they must improve in Amazfit Neo 2:

There were also some problems or issues that I think need to be improved in the next model. Let me list down those.

Amazfit is a very popular name in the smartwatch industry. All of their products are very popular among all age groups. So, you can go for their smartwatches. I have given some expected information about Amazfit Neo 2. This information is based on expectation and comparison with the previous model, so this information can be different after launching.