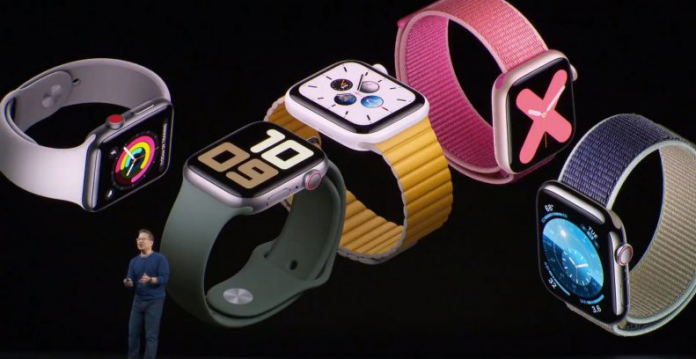 In its annual September event in Cupertino, Apple announced its fifth iteration of smartwatch, the Apple Watch Series 5. The major upgrade made over Series 4 smartwatch is the new always-on Retina display. The watch will maintain the 18 hour battery life like the previous one in spite of an always-on display. You can order it from now on and it will go on sale on September 20.

The design of Series 5 is exactly same as its previous model with 10.7mm thickness and 40mm x 34mm height and width specs for smaller version and 44mm x 38mm for bigger version. The price also remains in-line with last generation, the 40mm GPS model will cost around $399 and for 44mm model you have to pay $429.For cellular models you have to spend $100 extra.

If you choose a premium case finish (silver, space gray and gold) rather than standard aluminum the price will increase further. Apple is bringing titanium case finish for the first time and also bringing back ceramic finish which was removed from Series 4, along with stainless steel casing upgrades.

Series 5 Watch will be powered by all new WatchOS 6 to support new features. When not in use the watch screen will go on a dimmed mode with time, chosen watch face with few complications. You can still keep watch display like previous models on Series 5 which lights up only when tapped or wrist was raised. The new low-temperature polysilicon and oxide display (LTPO), the ultra-low power display driver and an ambient light sensor enables the Series 5 Watch to know when to illuminate based on wearer’s wrist position.

Apple has included a built-in compass in this and upgraded the Emergency SOS application on cellular models. It can now call services internationally and will direct you to appropriate emergency response team. There is also a new on-watch App store, a selection of apps and women’s health features. The health and fitness features are like the Series 4 smartwatch.

Apple will also continue collaborations with Nike (for Apple Watch Nike+ Edition) and Hermes with a number of faces and bespoke bands again available. To make way for Series 5, Apple has decided to completely call off Series 4.