Huami released a poster on Weibo that ties in with Avengers: Endgame. A popular Amazfit and Mi band products seem to be in action as it has scheduled to launch its band in June. This is the company’s first time association with any of movies.

Captain America, Iron Man, and Black Widow were featured in a teaser that released on Weibo. It also shows a mystery Amazfit watch. 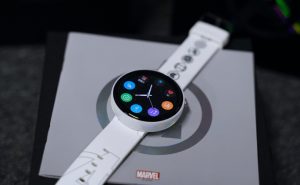 It is expected that the Amazfit Bip 2 will be a huge part of gossip this year which lately, has received an FCC listing also. According to leak, we can expect this can be the last option.  It can be the only Endgame variant amongst its all bands.

Probably, Huami is gearing up an Amazfit Avengers Endgame Edition as a tribute to Iron Man. Invitation cards have already been released featuring “Proof that Amazfit has a heart” on the front and the Arc reactor on the back.

Apart from that Bip the Amazfit product range currently includes Pace, Stratos, Verge, and a number of activity bands. The new watch will be sold in China as well as overseas. The poster has a round casing, we can probably expect Avengers Endgame special edition of Stratos or Verge. The watch is expected to be fielded on June 3rd.

The Xiaomi group has a strong portfolio of gadgets. We will go through the company’s new products as well. We expect to at least see something from them, though.

We keep publishing you very interesting and engaging gadget contents that will be going to benefit you while buying any of Xiaomi products so stay tuned.